I love me some March Madness. How could I not, I work in sports, duh! Every time that March rolls around I count down the days until I can start filling out my bracket(s) and placing my bets. The first few days are the absolute best. There is game after game after game and your bracket always takes a few hits. You live for the upsets, but are secretly mad that it messed up your bracket. There is a reason why they call it “madness”.

I wanted to share someone with you that knows more about sports than anyone else I know…  Luke [also my bf, hehe]. Luke attended IU [Go Hoosiers!] from 2000-2004 & majored in Sports Communications. So it’s safe to say he knows a thing or two about this topic. IU also made it to the finals in 2002, so I’m sure he has a thing or two to say about that experience. So without further ado, here is a Q & A with him below:

Why is March Madness such a big deal – & what is your favorite part of it all?
It’s twofold for me.  First of all, college basketball is just one of my favorite sports to watch and when you pack 60-some meaningful games into the period of a couple weeks, it’s going to be exciting.   Secondly, and most importantly, every game counts.  The tournament is single elimination, which builds the anticipation as each round progresses.  You lose and you’re out.  I think it’s a lot more exciting than, say, the NBA playoffs, where the games seem to drag on for months.  My favorite part is trying to keep up during the first 2 days when there are like 8-10 games on simultaneously, ALL DAY LONG.  It’s exciting!
What is your favorite March Madness memory?
Most definitely when my beloved Indiana Hoosiers made it to the NCAA Championship game in 2002. I was too young to remember much of the last NCAA title we won in 1987, so this was the first time I had experienced the true madness about a team I really cared for.   I was a sophomore at IU at the time, and it was unbelievable to be on campus with 30,000 other students cheering on your team as they progressed through the tournament.  I think the best part was that we came into the tournament as a 5 seed and no one gave us much of a chance from the beginning.  It was nice to prove the “experts” wrong.
What was it like having your alma mater in the finals?

It was one of the most exciting 2 weeks of my life.  IU had just fired Bobby Knight the year before and we were worried that it would affect the play of the team.  As we progressed through the tournament, every game meant more, and every party we had was more epic.  The best experiences were when we upset Duke (who was a much lower seed than our team), the Kent State game (they put on a 3-point shooting clinic, making their first eight shots from long range and 15 of 19 overall), and when nearly the entire student body convened on campus after we beat Oklahoma in the Final Four (at the Showalter Fountain, which was the meeting spot when the team would win).  We ended up losing in the Championship game to Maryland, which at the time was devastating to me.  Now that I am a little older, I’m just glad I was able to have the experience. 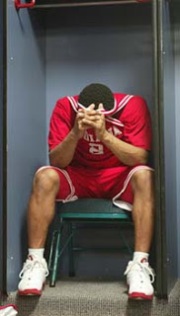 What team are you most excited to see play this year?

To be honest, since my team has been has been pretty atrocious this year, I haven’t paid as much attention as I should have.  I’m obviously hoping for a miracle, with IU needing to win the Big Ten Tournament to get into the big dance.  It’s never going to come close to happening, but a boy can dream.  Anyway,  I think the team I’m most excited to see this year is BYU.  They have who many think is the player of the year, in a kid named Jimmer Fredette.  The dude can shoot it from any spot in the gym and is just an overall exciting player.  Plus, they just went through some turmoil by having to release one of their best players for violating the ridiculous BYU “Honor Code” by having sex with his girlfriend.  Gasp!  At any rate, I want to see how they handle the absence of probably their best big man.

Which player(s) are you most excited to see this year?
As I mentioned above, I’m excited to see Jimmer Fredette from BYU.  The other players I really like to watch this season include JaJuan Johnson from Purdue (boo),  Nolan Smith from Duke, Kemba Walker from UCONN, Jared Sullinger from Ohio State,  and Ben Hansbrough from Notre Dame.  Is that enough?  I can keep going 🙂
Who do you predict to be an upset this year?

At this point it’s hard to pick any upsets because the bracket won’t be determined for another couple days.  As for teams that will probably be middle-to-higher seeds, I see Marquette, Michigan State, Villanova, and Gonzaga to possibly pull off some upsets.

What advice would you give to someone that is new to filling out a bracket?


When can we expect to see Indiana back in there? 😉
Ugh, you had to ask this didn’t you? Haha.  Well after the last couple seasons, there is nowhere to go but up.  Judging from the high school prospects that our coach Tom Crean is landing, I am very optimistic that 2-3 years from now we will be back to the Indiana Basketball that people are used to seeing.   I really hope this is the case because it’s tough to watch my favorite team continue to struggle.

— — —
I hope you enjoyed my guest!
If you don’t like sports, then you don’t understand! 😉
If you do, then I just liked you 10x more than I already did!

This site uses Akismet to reduce spam. Learn how your comment data is processed.